This search form uses an instant search feature. As you type, search results will appear automatically below the search field. When you've entered you desired search terms use tab to navigate through the available results and hit enter to open the selected page or document.
#ThrowbackThursday - Sheridan School Building in 1963
Lauren Goins
Thursday, June 02, 2016 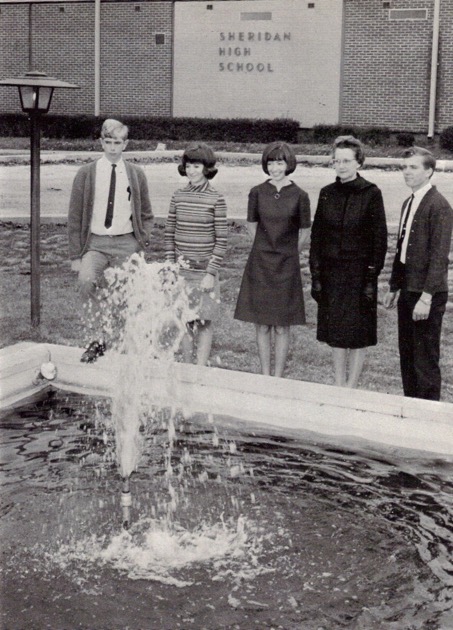 #‎ThrowbackThursday‬: In 1963 -- the year of President John F. Kennedy's assassination, Martin Luther King Jr.'s famous "I Have a Dream" speech, and the beginning of Beatlemania -- our Sheridan Junior High School (then Sheridan High School) was completed.

It is amazing to look at this building and think about how much has happened and how things have changed since the year it was built.

Pictured (from left) are Tim Armstrong, Marie Crawford, Kathy Grace, Mrs. Thornton, and C. W. St. John. Soon after the building was completed, the student council built a fountain dedicated to sponsor Wilma Stephens Thornton. The project, with Arkla Gas lighting and colored floodlights, was intended to lift the spirits of the student body.