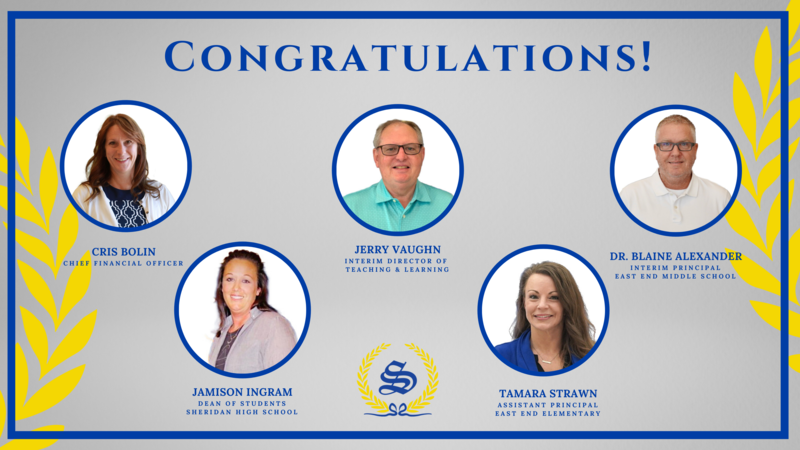 The Sheridan School District is pleased to announce the new administrators for the 2021-2022 school year.

Cris Bolin will replace Heather Szeflinksi as the new Chief Financial Officer at the Sheridan School District. She has more than 33 years of experience in financial management in a variety of industries, including government and health care. Before coming to the Sheridan School District, she was the CFO at Phillips County Health System in Phillipsburg, Kansas. Bolin comes to us highly recommended and is described as highly intelligent with keen attention to detail.

Jerry Vaughn will replace Dr. Bridget Russell as the Interim Director of Teaching and Learning for the 2021-2022 school year. Having spent 40 years in education, Mr. Vaughn brings a wide range of knowledge and expertise to this role. He served in the Cabot School District for 28 years as a teacher, guidance counselor, and building administrator. In 2003, Mr. Vaughn was selected as the Arkansas Association of Elementary School Principal of the Year. The following year he was selected as a National Distinguished Principal by the National Association of Elementary Principals. For the last 12 years, he has served as a performance coach for the Arkansas Leadership Academy, where he helped school districts across the state with leadership and organizational development.

Dr. Blaine Alexander will replace Lupe Peña de Martínez as the Interim East End Middle School Principal for the 2021-2022 school year. Dr. Alexander has a doctoral degree of Education in Adult Learning and Leadership from the University of Arkansas. He brings more than 26 years of experience in education as a teacher, principal, and the Leadership Program Director of Arkansas Leadership Academy. In his most recent position at the Arkansas Leadership Academy, he was responsible for collaborating with school districts across the state to develop strategic plans for continual district and campus level improvement.

Tamara Strawn will replace Rodney Williams as the assistant principal for East End Elementary. Ms. Strawn, known as Coach Strawn, has proudly served the YJ Nation for ten years. Before moving to East End Elementary, she was the head softball coach and assistant basketball coach for Sheridan High School. Her commitment to excellence and positive influence will be a tremendous asset to the EEE team.

Jamison Ingram will be the Dean of Students at Sheridan High School. Coach Ingram is a graduate of Sheridan High School and earned an undergraduate degree at Ouachita Baptist University and a Master's degree at Arkansas State University. She has been in education for 22 years, with seven of those years in the Sheridan School District. During her time in the Sheridan School District, Ingram has coached basketball and taught multiple subjects. In addition to her role as the Dean of Students, Coach Ingram will continue to be the head coach for the Lady Jacket Basketball program.